Hello lovelies! Today is my day on the A Touch of Darkness tour. Take a peek at an excerpt of the upcoming novel below!

Persephone is the Goddess of Spring by title only. The truth is, since she was a little girl, flowers have shriveled at her touch. After moving to New Athens, she hopes to lead an unassuming life disguised as a mortal journalist.

Hades, God of the Dead, has built a gambling empire in the mortal world and his favorite bets are rumored to be impossible.

After a chance encounter with Hades, Persephone finds herself in a contract with the God of the Dead and the terms are impossible: Persephone must create life in the Underworld or lose her freedom forever.

The bet does more than expose Persephone’s failure as a Goddess, however. As she struggles to sow the seeds of her freedom, love for the God of the Dead grows—and it’s forbidden.

Persephone sat in the sunlight.

She’d chosen her favorite spot at The Coffee House, an outdoor table just out of view of the shop’s window. Shade trees and box gardens teeming with purple aster and pink and white sweet alyssum lined the crowded pedestrian street. A light breeze carried the scent of spring and the honeyed air was mild.

This was her season. She should have felt more relaxed.

But her eyes drifted to a bunch of narcissus flowers that sat in a slender vase on her table. It was a sparse bouquet, and one flower’s petals were crisp and brown, curling like the fingers of a corpse.

The narcissus were the flower and symbol of Hades, the God of the Dead. They did not often decorate tables, but coffins instead. Their presence at The Coffee House probably meant that the owners were in mourning. Few mortals worshipped Hades, and even his cult—a group of mortals who maintained his temple—was small, and used only when death loomed.

Persephone wondered how Hades felt about that—to only be worshipped when the fear of death was imminent. Perhaps that was why he was so merciless.

“Don’t waste your time rationalizing his behavior, daughter,” Demeter, her mother and the Goddess of Harvest, had said. “Hades is a manipulator.”

And from what Persephone had heard since she moved to New Athens, her mother seemed to be right. Hades might be the God of the Dead, but he was also known as the Rich One. He controlled most of the world’s wealth, and had invested that money into a several clubs throughout New Greece—and not just any clubs. These were gambling dens. It was said Hades liked a good bet, and rarely accepted a wager other than the human soul.

Persephone tore her gaze from the flowers, and focused instead on her laptop and notes. It was Thursday, and she had left school an hour ago. She ordered her usual vanilla latte, and needed to start working on her research paper. She wanted to finish today so she could concentrate on her new internship at New Athens News, the leading news source in New Athens. If she did well, she’d have a job after she graduated in six months.

And she was eager to prove herself.

Her internship was located in the Acropolis. It was the tallest building in the city at one-hundred-and-one floors. One of the first things Persephone did when she moved to New Athens was take an elevator to the top so she could see the city in its entirety. Now, four years later, it was hard to believe she would be going there on an almost daily basis for work.

Persephone’s phone buzzed on the table.

She looked down and found a message from her best friend, Lexa Sideris. Lexa was Persephone’s first friend when she’d moved to New Athens four years ago. Through Lexa, Persephone had learned to be mortal, and though Lexa did not know it, she would always have Persephone’s protection and favor. What little she could offer, anyway.

Where are you?
Persephone responded, The Coffee House.
Why? We need to celebrate!
Persephone smiled. Ever since she’d told Lexa about her new job two weeks ago, she’d been hounding her to go out for drinks. Persephone had managed to postpone the outing, but she was quickly running out of excuses and Lexa knew it.

I am celebrating. Persephone text. With a vanilla latte.
Not with coffee. Alcohol. Shots. You + Me. Tonight.
Before Persephone could respond, a waitress approached holding a tray and her steaming latte. Persephone came here often enough to know the girl was as new as the narcissus. Her hair was in two braids, and her eyes were dark and laced with heavy lashes.

The girl smiled and asked, “Vanilla latte?”
“Yes,” Persephone said.
The waitress sat Persephone’s mug down, and then tucked her tray under her arm.
“Need anything else?”
Persephone met the girl’s gaze. “Do you think Lord Hades

has a sense of humor?”
Her eyes widened, and she responded, “I don’t know what

you mean.”
The girl was clearly uncomfortable, probably at hearing

Hades’ name. Most tried to avoid saying it, or they called him Aidoneus, to avoid drawing his attention, but Persephone wasn’t afraid. Maybe it had something to do with the fact that she was a goddess.

“I think he must have a sense of humor,” she said. “The narcissi are a symbol of spring and rebirth,” her fingers hovered over the petals. If anything, the flower should be her symbol. “Why else would he claim it as his?”

Persephone stared back at the girl, and her cheeks flushed. She stammered, “L-let me know if you need anything.”

She bowed her head and went back to work. 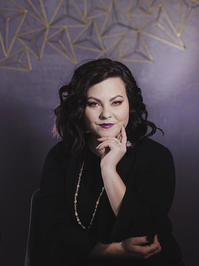 Scarlett St. Clair lives in Oklahoma with her husband. She has a Master’s degree in Library Science and Information Studies and spends a lot of time researching reincarnation, unsolved murders and Greek mythology-all of which made it into her debut novel, When Stars Come Out.