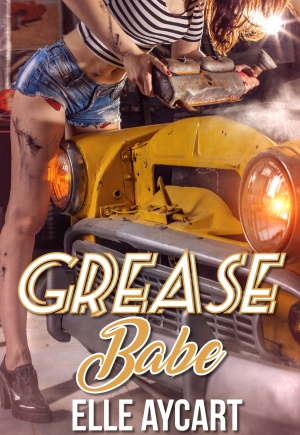 Alden is not only home to the gorgeous Bowen brothers, but also to the OGs, three hilarious octogenarian grandmas who believe age is nothing but a number. After their success helping one grandchild find love, they’ve decided to move on to the next. Nothing will stop them. Not even jail…

Rachel’s upbringing was rough, but at 34, she loves the life she’s built for herself. She adores her grandmother, Alden, and her job as a mechanic. Now, if her grandma and her friends would just stop getting into trouble, everything would be perfect. She’s doing her best to keep them on the straight and narrow, but she spends more time arguing with the sheriff than working in her garage. Case in point the OGs’ latest stunt, which got all of them, Rachel included, sentenced to community service. So now she has to keep an eye on the crazy grannies and on the street teenage thugs she’s been court-ordered to teach mechanics to.
And all thanks to the sheriff and that huge, unbendable stick up his ass.

Adrian Skehan, a top-notch detective in Boston, enjoyed putting dangerous criminals and drug kingpins behind bars. He loved his fast-paced, glamorous city life, but after his estranged grandfather had a major stroke, he moved to Alden, became the sheriff and now he spends his days chasing after senior citizens and dealing with the OGs –the bane of his existence— and Rachel, their obnoxious defender.
Terrific career move, really. Way to screw up his life. And his mental wellbeing.

As if life wasn’t hard enough, now the OGs have decided to work on their bucket list… meaning the granddaughter and the sheriff must join forces to survive the mayhem.
He likes his women… ivory-tower delicate. Not loud, highly opinionated and smelling of gasoline.
She likes her men… easy-going. Not arrogant know-it-alls and sticklers for rules.
Keeping these two together is a recipe for disaster. Too bad the OGs don’t see it that way.

After a colorful array of jobs all over Europe ranging from translator to chocolatier to travel agent to sushi chef to flight dispatcher, Elle Aycart is certain of one thing and one thing only: aside from writing romances, she has abso-frigging-lutely no clue what she wants to do when she grows up. Not that it stops her from trying all sorts of crazy stuff. While she is probably now thinking of a new profession, her head never stops churning new plots for her romances. She lives currently in Barcelona, Spain, with her husband and two daughters, although who knows, in no time she could be living at the Arctic Circle in Finland, breeding reindeer.

One thought on “Grease Babe by Elle Aycart – Cover Reveal”