The Kiss Me Series, an all-new hilarious series of standalones from New York Times bestselling author Emma Hart is coming August 27th and we have the fresh and fun covers! 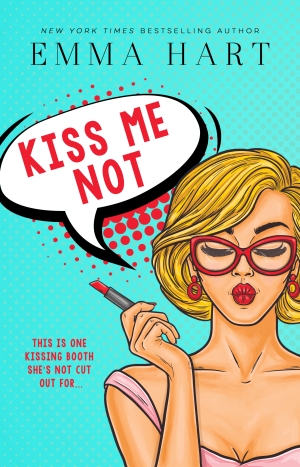 Let me make this clear right here, right now: I, Halley Dawson, do not care that Preston Wright is kissing other women.

I do care that he’s doing it six feet away from me behind a gaudy velvet curtain—making him my competition in this year’s kissing contest.

Why do I care, you ask? Because I’ve had an unfortunate crush on the insufferable idiot since I was sixteen years old, but I also know it’s never going to happen.
He’s the Creek Falls bachelor to die for, and I’m the Creek Falls racoon lady who puts peanut butter sandwiches out for them every night.

I’m not going to let him break my four-year-long reign—no matter how many times he breaks the rules and slides the curtain across to do the one thing he’s not allowed to:

What do a wrong number text, a burning building, and a quirky florist have in common?

A hunky firefighter with an extra-large…hosepipe.

In hindsight, I never should have opened that text message. The last thing I needed first thing on a Monday was a picture of some stranger’s, um, eggplant, in my inbox.

I also should have replaced the batteries in my fire alarm, because my Friday night did not need to end with my apartment building going up in flames.

But it’s fine. It’s fine. Everything is fine.

I’m only lying in a hospital bed with more split ends than I’ve ever had, almost all my Earthly possessions have turned to ash, and apparently, they don’t serve wine to patients in this place.

Until he walks in.

The guy who saved my life. My hero. Noah Jacobs.

And the universe is amusing itself at my expense, because the dirty photo I woke up to on Monday?

WANTED: ROOMMATE. Must be tidy, polite, and absolutely not my brother’s hot as sin best friend.

I have no idea why I said yes
.
Maybe I’d had one too many wines. Maybe I’d done it accidentally. Maybe I’d been sleep-texting.

One thing I know for sure is this: I absolutely do not want Ethan Hawkins in my apartment, up in my business, taking over my space.

Yet he’s here. Moving his stuff into my spare bedroom. Sending a wave of panty-melting, musky man-scent my way every time he walks past me.

We don’t get along—at all. We never have, and I don’t think we’re going to start now that we’re under one roof.

There’s also that little issue where I’m kinda, sorta, totally in love with him…

Emma Hart is the New York Times and USA Today bestselling author of over thirty novels and has been translated into several different languages.

She is a mother, wife, lover of wine, Pink Goddess, and valiant rescuer of wild baby hedgehogs.

Emma prides herself on her realistic, snarky smut, with comebacks that would make a PMS-ing teenage girl proud.