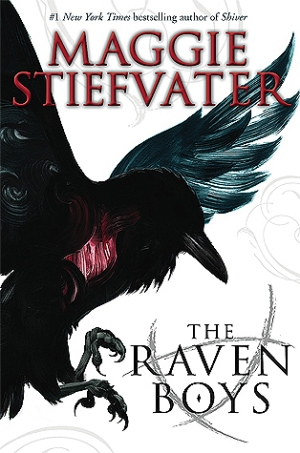 “There are only two reasons a non-seer would see a spirit on St. Mark’s Eve,” Neeve said. “Either you’re his true love . . . or you killed him.”

It is freezing in the churchyard, even before the dead arrive.

Every year, Blue Sargent stands next to her clairvoyant mother as the soon-to-be dead walk past. Blue herself never sees them—not until this year, when a boy emerges from the dark and speaks directly to her.

His name is Gansey, and Blue soon discovers that he is a rich student at Aglionby, the local private school. Blue has a policy of staying away from Aglionby boys. Known as Raven Boys, they can only mean trouble.

But Blue is drawn to Gansey, in a way she can’t entirely explain. He has it all—family money, good looks, devoted friends—but he’s looking for much more than that. He is on a quest that has encompassed three other Raven Boys: Adam, the scholarship student who resents all the privilege around him; Ronan, the fierce soul who ranges from anger to despair; and Noah, the taciturn watcher of the four, who notices many things but says very little.

For as long as she can remember, Blue has been warned that she will cause her true love to die. She never thought this would be a problem. But now, as her life becomes caught up in the strange and sinister world of the Raven Boys, she’s not so sure anymore.

“Fate,” Blue replied, glowering at her mother, “is a weighty word to throw around before breakfast.”

If you’re looking for the perfect cold season read, then look no further than The Raven Boys by Maggie Stiefvater. It’s the book to be curled up with in the dark while the cool, autumn rain or the calming winter snow falls outside. It’s scary but not in the horror movie way that makes you jump out of your seat in a fright. It’s the kind of scary that plays games with your mind, which I personally think is the much better version of scary.

Blue is by far one of the best female protagonists I’ve had the pleasure of reading in YA. She knows she’s quite different because of her upbringing but she doesn’t have a ‘not like other girls’ mentality. She is who she is and she owns that without bringing anyone else down in the process. It’s admirable and makes the story infinitely more enjoyable.

I know that everyone else who has read the series has probably said the same thing, but I want to protect each of those boys from all the bad things in the world. Especially Ronan. That boy is nothing but trouble (although secretely soft as soft can be) and he needs to be wrapped up in copious amounts of bubble wrap.

Blue’s family was also incredibly wonderful to read about. I love how Blue is surrounded by all of these women with strong personalities who embrace life and the gifts they have been given.

I don’t think I’ve ever read something where the writing matched the tone of the story so perfectly. Every sentence was dreamy and dark in the best way possible. Throughout the time I was reading the book, I kept taking pauses to fully absorb what I had just read. Some lines were so magical and it’s amazing that someone’s mind could be that awesome. Sometimes you can feel the author trying to hard to put in lines that will obviously be quoted in abundance, but at no point did it feel like Stiefvater was trying too hard. Everything she wrote felt so natural and so right.

The plot of The Raven Boys is one of the most unique plots out there. It’s filled with Welsh mythology, fortune tellers, dream cars, a magical forest, mystery, and boys/men with a slew of issues. Alright so boys with issues may not a new plot point but they are interesting issues that add to the story immensely and make you love it even more.

The pacing did seem a little slow at first, but the more you get into the book the more you understand that it needed to start that way. There are a lot of characters and she takes the time to develop them properly. Not only that, but the plot itself has a great deal of things to get through in order to understand the mythology and how it ties in with everything else going on. If you’ve ever read this and weren’t sure if you should continue because of a slow beginning, don’t stop. Do not put it down. It’s an extraordinary read you don’t want to miss out on.

To sum this up, pick up a copy of The Raven Boys immediately. If you’re looking for a dark and magical story filled with Welsh mythology and mystery, this is for you. Even if these may not be your preferred genres, you should still pick it up to be honest. Stiefvater’s writing is so perfect that I promise it’s worth the read.

11 thoughts on “Review: The Raven Boys by Maggie Stiefvater”

Leave a Reply to Kayla @ Books and Blends Cancel reply