Sitting at the wrong table turned my life upside down.

I was supposed to be on a date with one man but made a huge mistake—a mistake I keep bumping into all over New York City.

Clark Chambers is arrogant, straightforward, devastatingly handsome, and takes what he wants. And right now his sight is set on me.

But he only wants friends with benefits. And I’d rather eat dirt than agree to that.

After an “enough is enough” moment, I turn to the Universe for help & ask for a special sign.

And it’s just my luck … looks like rabbits & romance really do mix!

Juliette is a high school English teacher who is an avid user of online dating apps in search of her Prince Charming. All she seems to have found are absolute duds who usually leave her with a less than memorable first date. On yet another first date, in a bar that was almost impossible to find, Juliette sits down at a table with a man who scolds her for being late. She’s annoyed but slightly intrigued at this handsome man in front of her.

Two minutes later, her real date shows up and she realizes she sat down with a man named Clark by accident. Of course, they keep running into each other. And eventually Clark proposes they have a friends with benefits arrangement because neither can seem to get each others minds off the other.

This book was pretty short, and because of that, neither Juliette nor Clark were characters who were all that developed. Juliette was a basic heroine with nothing much to her and Clark was afraid of relationships with no real reason behind it. Usually the guys have some trauma of a previous relationship that messed them up real bad. Clark just wants to sleep around and never get attached.

The romance for me fell pretty flat. I didn’t feel the chemistry between Juliette and Clark at all. I wasn’t invested and wasn’t their biggest cheerleader like I would be for the couples in romance books I’m reading. Even the sex scenes were a little bland for me. There was nothing about their love story that kept me on the edge of my seat.

The plot somewhat confused me in the sense that the bunnies thing from the synopsis wasn’t a part of the story until really late in the novel. I kept trying to figure out what bunnies had to do with anything, or if it was supposed to be a cat because there was a sign that involved a cat earlier in the novel.

Overall, this was a romance novel that wasn’t anything to write home about. The writing was good, but the plot and the chemistry just fell flat for me. 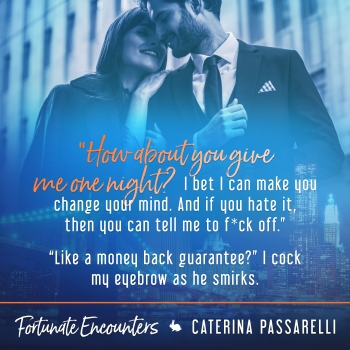 Former TV News Producer turned Romance author, Caterina Passarelli has always had a love for words. From real-life Detroit crime to fictional love stories around the globe, she hopes to take her readers on a fast-paced adventure. Caterina is the author of five titles in multiple genres: Romantic Comedy, Contemporary Romance and Romantic Suspense. When she’s not writing about alpha males and strong, sarcastic women, she is the CEO of an online fitness coaching company. Caterina is the fur mom to her three-year-old rescue dog, Piper, who she spoils uncontrollably. She loves hearing from her readers on her Facebook page!