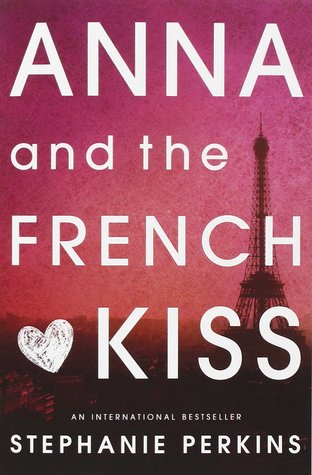 Can Anna find love in the City of Light?

Anna is happy in Atlanta. She has a loyal best friend and a crush on her coworker at the movie theater, who is just starting to return her affection. So she’s less than thrilled when her father decides to send her to a boarding school in Paris for her senior year.

But despite not speaking a word of French, Anna meets some cool new people, including the handsome Étienne St. Clair, who quickly becomes her best friend. Unfortunately, he’s taken —and Anna might be, too. Will a year of romantic near misses end with the French kiss she’s waiting for?

“Is it possible for home to be a person and not a place?”

You’ve probably heard this all over the Internet before, but Anna and the French Kiss is truly one the best YA contemporary novels around. It’s a fluffy and light read about a girl sent to boarding school in Paris. Of course, she doesn’t want to suddenly have to go through this change of scenery, but it’s Paris. Come on. There are worse places for your parents to send you off to for school. While in Paris, Anna meets some cool new friends and an international hottie that I’m certain is on everyone’s “favourite book boyfriends” list. He’d definitely be on mine.

We have our main character, Anna, who has been sent to boarding school in Paris for her senior year of high school by her romance novelist father (who gives me some serious Nicholas Sparks vibes) and she really doesn’t want to go. She has her mom and her brother, her best friend, and the guy she’s totally head-over-heals for who might have been about to be her boyfriend. She’s your run-of-the-mill not popular, ‘different than the other girls’ kind of girl, but she was still pleasant to read about.

Étienne was flawless. Not literally because he made some questionable decisions by being a bit of a baby for a hot minute, but I liked him anyway. I adored the fact that even though he wasn’t constantly described as being perfect physically, like most romantic interests are made out to be, he was still most girls’ crush. He had such an attractive demeanor and personality. And his dynamic with Anna. Oh my goodness. All those moments that would be heart-racing for them and have them thinking about those few seconds for days truly captured those feelings of falling for someone and having everything they do make your stomach go round in circles like a gymnast doing 800 flips during a floor routine.

The writing of Anna and the French Kiss was such a treat. They way Stephanie Perkins was able to bring these characters to life was great. My absolute favourite part about the book was the setting. Besides Étienne, I mean. The way she described all the scenes and landmarks around the city of love made me feel like I was there. It was so easy to picture everything as it happened and to me that made Anna all the more romantic and enjoyable to read.

The plot was mostly great. Maybe it’s my own personal experience, but I can’t imagine being able to run around Paris by myself at 17. Every once in a while it made me think of the characters as older than a YA age range. Their personalities of course fit the bill of YA so it all balanced out in the end. This isn’t to stay I didn’t still adore the story as a whole though. I really do love this book.

The pacing of the novel was good. I appreciate the fact that it wasn’t insta-love. You knew they were clearly into each other from the start, but it took them some time to get to the finish line. They got a chance to develop their friendship before jumping into the relationship boat and I think as a reader it makes their feelings for each other feel more legitimate. They had time to truly think on their feelings and realize that how they each felt about each other was the real thing.

All in all, Anna and the French Kiss was a wonderful read. It’s one of those books you can get through in an instant and feel so satisfied about it when you’re finished. I highly recommend picking it up, especially to someone who is looking to play around in YA contemporary but not sure where to start. It’s a staple that is very much worth your time.

3 thoughts on “Review: Anna and the French Kiss by Stephanie Perkins”